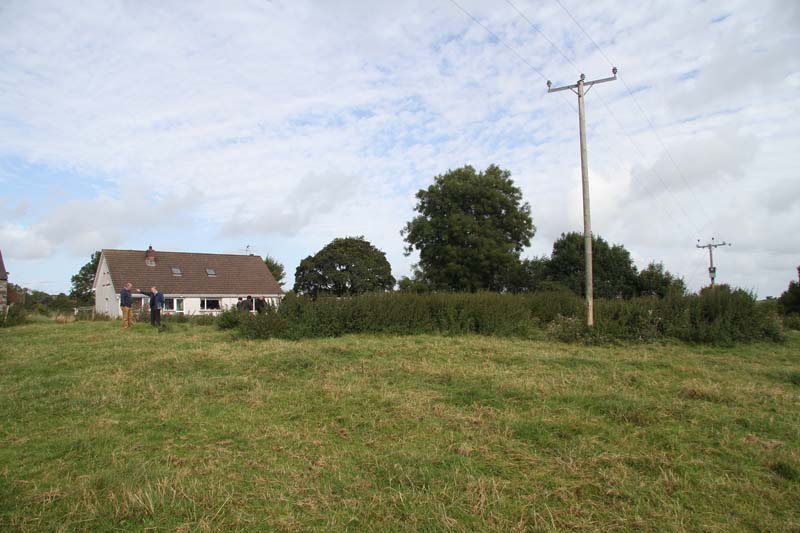 The barrack was sited on a low hill just south of, and rising up from, Hamiltonsbawn village. The section of Mullaghbrack road at which the site was located was known locally until the 1970s as ‘Barrack Hill’, which was the official postal address for the homes on that section of road. The barracks has always been referred to as Hamiltonsbawn barracks.

The site is now a farm field, with farm buildings in the north-west corner, on the eastern side of the Mullaghbrack road (B111) heading south from Hamiltonsbawn towards Markethill. There is also a low lying ditch or old man-made earth wall immediately opposite the main barrack site on the western side of the Mullaghbrack road. This is of unknown date, but corresponds with a more substantial structure with out-buildings shown on the first edition OS map, and may have been part of the barrack complex. The OS map shows the main barrack site on the eastern side of the road also, which is identified as ‘Hamilton’s ruins’. The site has four square buildings depicted in a square formation with a building in each corner on a north-east, north-west, south east, south-west orientation, and a fifth rectangular building to the immediate south west of the south-west corner of the square formation. This organisational structure is in keeping with the suggested layout of the barracks currently evident from the lie of the land, as follows:

Some foundations were still visible 35 years ago on the barrack site (local sources). Some stones are still visible at the site, which may be from the original barrack buildings, while the actual location of the barrack buildings still seems to have left some imprint on the land, with an evident square shape of slightly raised earth suggesting the boundaries of the barrack, or some part of it.
Click the thumbnails below to view larger images:
[Not a valid template]

The barracks was built in 1731 on the site of a 60-square foot defensive Bawn with 12-foot high walls constructed out of lime and stone with two flankers, which had been built as part of the plantation undertaking by the Scottish settler John Hamilton in 1619. A local tourist notice board records that by 1622 the Bawn was 90 feet long and 63 feet broad. Hamilton was responsible for somewhere between 20 and 26 families in the area, and was able to arm 30 men as required by his undertaking as part of the Ulster plantation under James I. Prior to that time the area was known as Monela or Moynellan, or the plain of the glenside. The Bawn was almost completely destroyed during the 1641 rising in Ulster, but following the Restoration of Charles II in 1660, Sir Hans Hamilton, son of John, built a three, or possibly five, chimney mansion or manor house on the ruins of the Bawn. Because of the tall chimneys, the house was known locally as ‘the Castle’, which led to some confusion in some nineteenth-century publications which recorded in error the existence of an actual castle at the site.

Owing to substantial family debts, the land on which the Bawn and house stood was sold by Sir Hans Hamilton II, grandson of the first Sir Hans, in the early eighteenth century (possibly 1704) and by the 1720s it had come into the possession of Sir Arthur Acheson of Markethill. The Achesons were the future Lords Gosford of Gosford Castle at Markethill.

Jonathan Swift visited the home of Sir Arthur Acheson of Markethill for lengthy periods in 1728 and 1729, on the latter occasion composing the poem ‘The Grand Question debated: whether Hamilton’s Bawn should be turned into a Barrack or a Malt-House?’ (Simms 1971, 139) The decision to lease the land to the government for a barracks won out in the end. The land was initially leased by the government from Acheson for £60 a year for 30 years, though Acheson was required to undertake transforming the old mansion / manor house into a barracks and stables first. The resulting barracks could accommodate two troops of horse or dragoons. In 1733 it was garrisoned by a substantial detachment of Colonel Clement Nevil’s dragoons under the direct command of the regiment’s Lieutenant Colonel, and in the following year by Colonel Henry Hawley’s dragoons under Lieutenant-Colonel Kerr.

It has been suggested that the barracks was de-commissioned in 1787 (McGleenon 1993, 54), in which year the government were still paying rent for the site, but it appears that the barracks may have remained in use after that date. The 1837 Topographical Dictionary states that the barracks was garrisoned ‘until recently’, without giving a date. The Parliamentary Gazeteer from the early 1840s though states that the barracks was still being used as a ‘regularly garrisoned barrack’ sixty or sixty five years earlier, which seems to imply, though without any certainty, that it was not in use in the intervening period. Other sources state that it was used in 1798 to house 125 French soldiers who had been forced-marched from Kinsale. It is also suggested that the government only finally stopped using it as a barracks around 1830.

In the 1830s permission was sought from Lord Gosford by a Mr James McRoberts, grocer, to allow the local inhabitants to dismantle the barracks in order to use the stone for local improvements. This resulted in the stone Hamilton armorial shield which had been part of the Restoration manor house ending up in the side wall of Gildea’s Pub in Hamiltonsbawn at the corner of Main Street and Mullaghbrack road.

The army made regular complaints about lack of forage, according to local sources, who state that the barracks housed 200 Dragoons. The tourist notice at the site states that the barracks was ‘garrisoned by troops of dragoons armed with 200 muskets until the 1830s’.

A surviving parish register for the years 1767 to 1782 records 22 army marriages in the local Church of Ireland church in Mullabrack parish, which suggests the possibility of close fraternisation between the soldiers in the barracks and the local community, and a significant degree of integration of the army in local society.