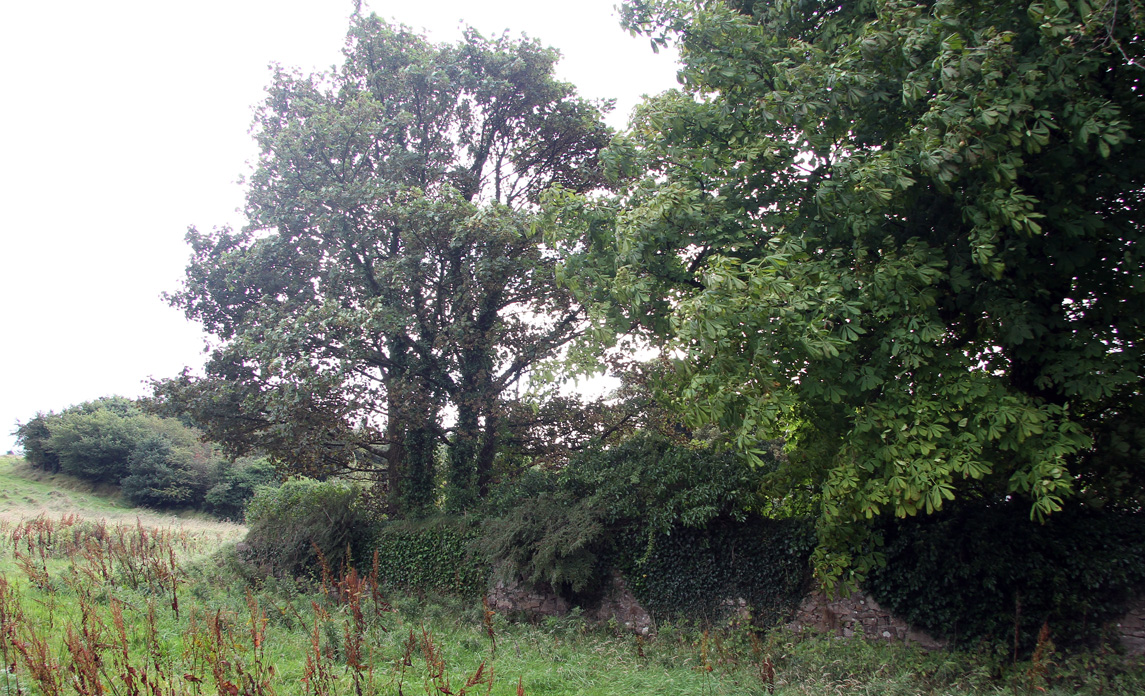 The location of the site of Fourmile House barracks is in the centre of the modern village of Jonesborough. The barrack site is located close to Fourmile Water, and north of Threemile Water, both of which were crossing points of rivers on the road from Dundalk to Newry.

The barracks is depicted at this location on a number of eighteenth-century maps from 1711 onwards. The first edition OS map from the 1830s-40s shows a site identified as ‘Old Barrack’ in Jonesborough village. This site corresponds with the current location of a Roman Catholic parochial house which was constructed in 1896. A Roman Catholic church is currently located immediately to the north of the parochial house. The site of the current RC church corresponds with that of the ‘R.C. Chapel’ evident in the first edition OS map. According to local sources, the Roman Catholic church was burned in 1798 by the yeomanry under ‘Sever of the Bog’.

The entrance to the barracks site is located at the junction of Molly Road and the B113, and faces west-north-west. The B113 follows the same route as the main road from Dundalk to Newry in the eighteenth century. An approach avenue of approximately 70 metres in length provides access to the site today. This access route corresponds with that evident on the OS maps.

The site has a commanding view in a westwards direction towards Drumintee, Slieve Gullion, Croslieve and Forkhill, and southwards towards Slievenabolea, Moiry Castle and Feede mountain. On the rising ground to the east of the site are the remains of a pre-medieval structure, which corresponds with the location of a ‘Fort’ evident on the first edition OS map. The rising ground to the east and south-east of the site now incorporates part of Drumad wood. The water works on this rising ground behind the site is a modern structure with no connection to the barracks site.

[Not a valid template]

Two temporary redoubts were constructed in 1689 by the Jacobite army in the area of Fourmile house, though there is no evidence of their actual location. The construction of a more permanent barracks at Fourmile House commenced in 1701. This barracks was a redoubt, which was a defensible structure built for internal security purposes, and was one of a number of such barracks funded in 1701 in order ‘to prevent robbers’ and secure safe passage through certain areas. The purpose of the Fourmile House redoubt was to ensure safe passage on the road from Dundalk to Newry. It was close to Moiry Castle, which had been erected at the beginning of the seventeenth century in order to defend the pass there.

The barracks was originally referred to as Fourmile House, which denoted the distance travelled, in Irish miles, on the road from Dundalk to Newry. The presence of the barracks seems to have resulted in the village of Jonesborough being established around it, sometime after 1710, in which year application was made to hold a fair in the area, an event which often resulted in a village or town growing up around that location thereafter. On a 1711 map, the barracks is noted as ‘4 Milehouse at Jones Borough’, which suggests the village was already in existence. By 1733, the name of the barracks had changed, in which year its location was recorded as ‘Joans-Borrogh and fuzes’ when a detachment of Bissett’s infantry were stationed there under a Captain Roper (Quarters of the army 1733, 9). A year later, the barracks was described as ‘Newry Mountains, near Newry’ and was under the command of a Captain Stanhope from Otway’s regiment at that time (Quarters of the army 1734, 11). Documentary sources indicated that the redoubt could accommodate one or less company of infantry. The redoubt was certainly still in use by 1759, but it is not clear how soon after it was deemed no longer necessary.

In 1706 a detachment of soldiers from the Fourmile House redoubt were meant to assist in the arrest by Walter Dawson of Doctor Patrick Donnelly, the RC archbishop of Dromore, at the foot of Slieve Gullion Mountain. The soldiers did not attend to that service, however, much to Dawson’s displeasure: ‘I had the faithful promise of Captain Briser who commands the redoubt near Newry to supply me with a serjeant and twelve men, upon which I went off and ceased [sic] the Doctor, and immediately after I despatched an express to be a guide to the said soldiers to me, and stayed in the mountains at least five howres for them, but the Captain was soe unkind as not to send one man’ (Murray 1937, 20).

In 1813 the new Protestant curate at Jonesborough, Richard Kidd, recorded that he was at that time living in the barracks: ‘The barracks where I at present reside by permission of his Excellency the Lord Lieutenant’. He also noted that ‘There is an old Romish chapel unroofed belonging to the parish. . . but the priest assembles his flock in the open air, under the ruins of an old building nearly opposite the barrack gate.’ In 1815 the Church of Ireland Glebe House was built further down the road, which presumably resulted in Kidd moving out of the barracks. According to local information there is a site known as the ‘Priest’s Field’ nearly opposite the barracks, which may be the same location as that described by Kidd for the RC open air mass.

By 1837 the barracks was described as having been converted into a private residence. Whatever original buildings were still remaining during the nineteenth century appear to have been finally demolished by the time the new Roman Catholic Parochial House was built on the site in 1896. It is not evident at what point in time during the nineteenth century the land and buildings were transferred into the ownership of the Roman Catholic church.